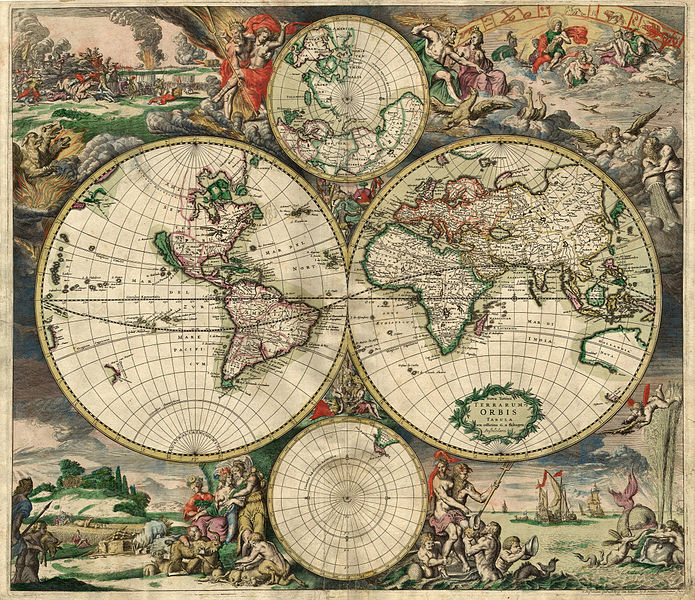 On this day in 1493, Christopher Columbus first sighted an island which would later be known as Puerto Rico.

Christopher Columbus is certainly one of the most famous explorers the world has ever known – but humankind has been exploring their world right down through history. We’ve picked out some of the most interesting explorers, from Harkhuf, the first recorded explorer from c. 2280BC, right up to Gertrude Bell, who made time for writing, archaeology, politics and spying as well exploring!

Harkhuf was Governor of Upper Egypt in the 23rd century BC. His autobiography is recorded on his tomb, and reveals that he led at least four expeditions in his lifetime, into Nubia to forge political relationships and trade.

It seems that Harkhuf was greatly praised for his travels, as well as the gifts and resources he brought back with him, which ranged from incense and ebony to a ‘dancing dwarf’ for the young Pharaoh, Pepi II.

One of these journeys he undertook in ‘only seven months’ – on foot, leading a caravan of donkeys to carry the wonderful goods.

HANNO THE NAVIGATOR, 500BC

Hanno the Navigator was a Carthaginian explorer who led an expedition along the west coast of Africa in around 500BC.

From Carthage, in modern-day Tunisia, Hanno sailed at the head of a fleet of 60 ships through the straits of Gibraltar and certainly as far as Morocco – some scholars believe that he reached all the way down to Gabon.

During the course of his travels, he came across ‘savage men’ with ‘hairy bodies’. Though they tried their hardest to capture some, the males evaded capture and the women were so violent towards their captors that they were killed and flayed, and their skins transported back to Carthage.

This is widely supposed to be the first reference to gorillas; Hanno’s guides referred to them as Gorillai, and the great apes were later named after this account.

Pytheas was the first Greek to visit and describe Britain. Though his written work, On the Ocean, has been lost, we know of it from later sources.

Pytheas apparently explored Britain on foot. Strabo claimed that he “travelled over the whole of Britain that was accessible”. Estimations of the length of the perimeter of Britain suggest that he circumnavigated the whole island.

Pytheas also travelled north, and said that six days in this direction from Britain was an island near a frozen sea. It’s with reference to this island – perhaps Iceland or Norway — that Pytheas gave the first ever written description of the midnight sun.

Gudrid Thorbjarnardóttir was the daughter of a Norse Chieftain. She and her father left Iceland and voyaged to Greenland, accompanying Erik the Red, who is generally considered the first person to discover the island.

Not content with this, she travelled twice to Vinland, the Viking settlement in North America, where she gave birth to the first European known to be born in North America.

After the death of her husband, she converted to Christianity and made a pilgrimage from Iceland to Rome on foot, where she may even have met the Pope. She then returned to Iceland to live out her days a nun.

She is popularly supposed to have been the most widely travelled woman in the world for a great many centuries.

James Holman was a remarkable and famous British explorer, who – despite suffering from total blindness, debilitating pain and limited mobility – undertook an extensive series of solo journeys, ranging from travels through Europe to an attempt to circuit the world, from east to west.

He didn’t make it. Upon reaching Siberia, Holman was abruptly arrested on suspicion of being a spy, and taken back the way he’d come.

He wrote several books on his travels, and though the first couple sold well and made him famous, by the end of his life, interest had waned. His final book was never published, and is most likely lost.

Holman travelled a truly staggering quarter of a million miles during his lifetime.

Gertrude Bell was not only an explorer, but also a writer, political officer, mountaineer, archaeologist and spy.

Despite her presumably hectic schedule, she managed in her early life to record 10 new paths or fist ascents in the Bernese Alps where one peak, Gertrudspitz, is named after her. One failed attempt saw her and her guides “on the rope” for 48 hours in snow, hail and lightning.

Gertrude Bell was deeply involved in the creation of the borders and administration of the modern state of Iraq. Upon her favoured candidate becoming king, she wrote “You may rely upon one thing — I’ll never engage in creating kings again; it’s too great a strain.”

Think we’ve missed someone interesting off our list? Let us know!

Not all explorers discover new countries. Desert exploration, just like polar expeditions, can be riddled with danger and adventure. Strike out into unknown lands with these Great Desert Explorers, whose achievements and challenges have been often overlooked in the history of exploration.

Click on the cover image for more info and to order!