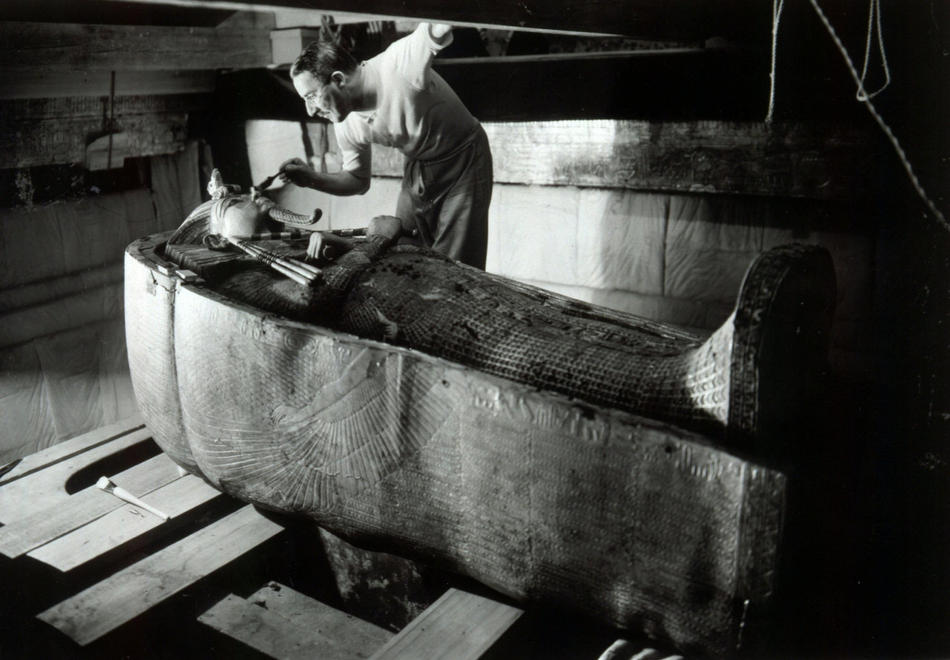 On 16th February, 1923, Howard Carter unsealed one of the most famous tombs in history: the Tomb of Tutankhamun.

Full of amazing treasures and containing the untouched mummy of the young Pharaoh, it was an extraordinary glimpse into the often extravagant burial practices of Egyptian royalty.

Though mummification and interment in an extensive and highly decorated tomb with rooms full of great treasures might seem a little over-the-top by our modern standards, it’s far from the most unusual burial practice. We’ve taken a look at five of the most interesting, unusual or extravagant tombs and cemeteries from world history.

The Capuchin Catacombs started life when a cemetery built for Capuchin monks at the Monastery in Palermo proved to be too small for the needs of the growing population of monks. Excavations began to create a new, larger cemetery, using the already existing ancient caves.

When the monks from the original cemetery were moved to their new resting place, 45 of them were found to have been naturally mummified. Believing this to be an act of God, the Capuchins displayed the bodies as relics in wall niches in the new cemetery, rather than re-burying them.

Between the 17th century and the cemetery’s official closure in 1880, thousands of people requested to be mummified and buried there, and were allowed – in exchange, of course, for a generous donation to the Monastery. Mummification and display in the catacombs became a status symbol, and have resulted in this unique collection of both naturally and artificially mummified remains – which are still on display to the general public.

A small chapel located in the Czech Republic, this famous attraction looks from the outside like any other medieval gothic church. Once inside, however, it becomes clear that it is rather more than that.

After the Abbot brought back holy soil from Golgotha in the 1270s and sprinkled it over the cemetery of the Abbey, it became highly desirable to be buried there. As well as a general demand from throughout Europe, the Black Death and Hussite Wars meant that the cemetery had to be greatly expanded.

The ossuary – a final resting place for the skeletons, after they had been buried for a few years and then retrieved to make room for new burials – is estimated to hold the remains of between 40,000 and 70,000 people.

When a local woodcarver, František Rint, was given the job of bleaching and organising the remains, the results were as macabre as they were beautiful. The human bone chandeliers, crests and decorations draw over 200,000 visitors per year.

City of the Dead, Dargavs, Russia

In Southern Russia, in the republic of North Ossetia, there is an incredibly remote village in the middle of a mountain valley. It is made up of around a hundred small stone structures, with pointed roofs and tiny rectangular openings for doors.

However, this is not a village for the living. Each of the structures is a crypt inside which the dead are buried – many in boats, despite the absence of any navigable rivers in the region. In some, the bodies are partially mummified, while some contain nothing but disjointed piles of bones.

It’s said that during times of plague or sickness, individuals without families, as well as families where all members were infected, would move into one of these small houses, and await death – thus solving the problem of having nobody to bury them after their deaths.

The date of the earliest of these structures isn’t clear, with claims ranging from the 12th to the 16th century.

In County Meath, Ireland, lies a sprawling burial mound notable for its antiquity – it predates both Stonehenge and the Great Pyramids at Giza, having been built between c. 3200 and 3100 BC.

The passage within the mound was found to contain human bone – both burnt and unburnt, suggested that both bodies and cremated human remains were buried there. Various grave goods have also been found in the passage, including beads, pendants, and bone pins.

Aside from its impressive construction and early date, the site is famous for the suggestion of its possible ritual or religious significance. The alignment of the passage within the tomb seems to match up exactly with the sun on the winter solstice, and has a roof opening which allows the sun to fill the passage with light during the solstice.

The mound also became associated with figures from folklore, and was widely supposed during the Middle Ages to be the abode of the Tuatha de Danann, a supernatural race in Irish mythology.

No list of interesting tombs would be complete without mentioning the Mausoleum of the First Qin Emperor, dating from approximately the 3rd century BC.

The tomb is most famous for the Terracotta Army which was found by accident in 1974 when farmers digging a well broke into a pit containing life-size terracotta figures. Estimates suggest that the three pits containing the army held more than 8,000 soldiers – each with distinctive facial features. Also found were c. 40,00 bronze weapons, which were incredibly well preserved.

But this collection is not the tomb itself. The Terracotta Army is part of a much larger necropolis, which has been estimated at 38 square miles – meaning less than 1% of it has been excavated. The tomb itself appears to be the size of a football pitch – but it remains unopened, due to concerns about preservation of the artefacts within after it was found that the lacquer on the terracotta army figures could flake off in just four minutes after being exposed to the air.

Furthermore, sources claim that – among other marvels — there were mercury streams inlaid in the floor of the burial chamber to simulate rivers. Samples from the earthen burial mound have all tested highly positive for mercury.

Until archaeologists can work out how best to protect the contents of the tomb – and to protect excavators from the tomb itself – the mysteries and treasures of the tomb will remain unknown.

Questions, comments or suggestions for the blog? Tell us!

For more information on extraordinary tombs and burials, why not take a look at these…