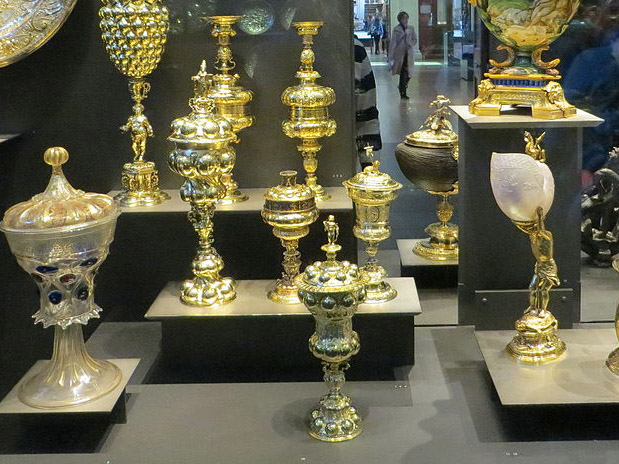 What does a museum do when it discovers that an artifact is a forgery? What should a museum do? Oxbow marketing executive BECCA WATSON explores fakes and forgeries of antiquities and visits the Waddesdon Bequest Gallery at the British Museum to find out.

Humankind has a long and distinguished history of faking it.

Forgery is far from a modern phenomenon; examples of objects deliberately created to be passed off as a much earlier, and often very valuable, original can be traced back to antiquity. The Apollo of Piombino is a Roman forgery of a much earlier Greek work, complete with a fake inscription. An inscribed cruciform stone from the temple of Shamash, in Sippar, claims to be from somewhere between 2276 to 2261 BCE. Its context, however, dates it from the 7th to 6th century BCE.

Some might say that the problem of artifact forgery is endemic, encouraged by the increasingly commercial nature of the antiquities trade. It’s not unheard of for fakes and forgeries to end up in museums, either as part of larger of collections, or which are only identified after accession. So what does a museum do with fakes in its collections?

This can all depend on context. A notable news story from 2013 saw a museum in China’s Hebei province shut down when thousands of its exhibits proved to be fake. One such object was a supposedly Qing-dynasty vase which was decorated with modern cartoon characters. Though there were denials from the museum’s director at the time, this seemed to many to be a case of deliberate deception by the museum itself.

An extreme example, perhaps, and in the case of deliberate forgeries, museums are mostly unaware that they are taking them in. In 2010, an exhibition opened at the Victoria and Albert Museum in London, in partnership with Scotland Yard, exploring the work of Shaun Greenhalgh. Greenhalgh was a counterfeiter who had forged modern and antique art alike, with some of his pieces fetching six-figure sums from galleries or museums. These objects are usually kept in police storage, as evidence in cases of fraud. But in this case, a museum used them to teach the public about the problems in the trade and collection of antiquities that can affect museums.

Sometimes, fakes or forgeries arrive at a museum as part of a larger collection of objects. The Brooklyn Museum’s Friedsam collection, for example, is a sizeable bequest of over 900 items. Over a quarter of this collection later proved to be faked or forged. Since, according to the terms of the donation, the collection cannot be split up without the permission of the estate’s executors – long since dead – the museum has these items in storage, an expensive use of space. These items were not deliberately sold to the museum in full knowledge of their provenance for profit, but made up a larger body of objects which were given freely.

Is there anything a museum can do beside store such objects, until such time that they can be deaccessioned or otherwise got rid of?

Take the Waddesdon Bequest at the British Museum, a collection of almost 300 objects which, like the Friedsam collection at Brooklyn, were left to the Museum upon the death of the collection’s owner – in this case, by Baron Ferdinand Rothschild. The collection was donated in 1898, and consists of important medieval and Renaissance pieces, as well as a number of 19th century fakes.

One such forgery is a gold- and agate-handled circumcision knife, right, originally attributed to a ‘Dutch workshop, early 17th century’. It was more probably made in the mid-19th century, and  has been associated with the workshop of Reinhold Vasters, a notorious forger. In the British Museum’s Waddesdon Bequest Gallery, designed to display this important collection, these fakes are included alongside genuine artifacts.

They’re kept on display because, although not genuine, they are still educational. The purpose of museums is to teach us about the past, about ways of living, dying and interacting with the world around us back through history. These fakes are a window into the fascinations and demands of the 19th century, when this collection was originally being curated. There was a significant demand for ‘Judaica’ – objects associated with the Jewish faith – for collectors, and as such, forgeries such as that of the circumcision knife were created and sold to the collector’s market. It’s in this way that the value of the Waddesdon bequest, and other collections like it, is above the mere beauty, value and insight of the individual pieces, whether genuine or fake.

Humans have been faking it for just about as long as ‘it’ has existed. It would be foolish to simply hide all forgeries and fakes away forever, or to deny their existence. After all, they’re a testament to human nature – to our concept of value, to our character as collectors, our capability to deceive, and to our interests, foibles and fashions.

Whether we like it or not, these forged artifacts are a part of human history. The Waddesdon Bequest Gallery is a beautifully curated and rich reminder of this.

Want to find out more?

A ROTHSCHILD RENAISSANCE: A NEW LOOK AT THE WADDESDON BEQUEST IN THE BRITISH MUSEUM, edited by Pippa Shirley and Dora Thornton, and published by British Museum Press, explores a variety of aspects, objects and themes of the collection, and positions the Waddesdon Bequest within a wider intellectual and historical context for the first time. Find out more by clicking on the cover image.

You can also visit the Waddesdon Bequest Gallery at the British Museum, or browse the objects on the new micro-site.

Join in the conversation!

Click here to keep up to date with all of our recently published and forthcoming books, and all of our best bargains by signing up to our mailing list.