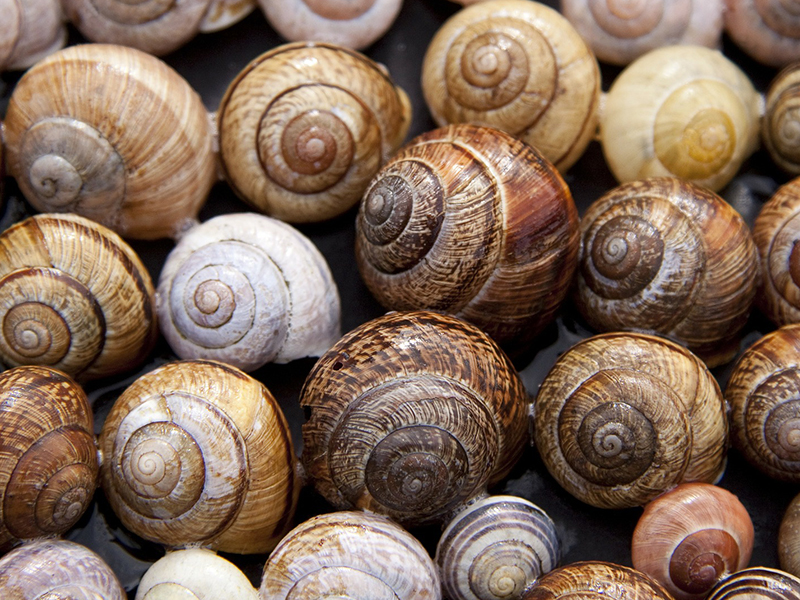 Do people really eat common garden snails? How long have snails, shellfish and molluscs been eaten throughout human history? And what can their remains at archaeological sites tell us about the past? Oxbow author and guest blogger MIKE ALLEN shows us snails like we’ve never seen them before.

Ever eaten moules marinières with wonderful white wine liquor and fresh bread? Or fruits de mer heaped with cockles, prawns and crab, or oysters with a nice cool white wine? Many of you will have enjoyed this while on holiday, and increasingly at home too. What about snails? Many turn up their nose at thought – they’ve seen what they think as a greenish-grey, slimy, ugly thing lumbering through the garden leaving a snotty trail behind … how could I eat that?

Well there are two points:

i) Ugly they are not …. their bodies have intricate skin ‘patterning’ of varying colours, and glisten as their bodies contract and expand in waves as the glide along. Their shells are a marvel of architecture and sculpture – their wrinkled shell almost looks like drops of water frozen on the shell, each similar, yet each different and personal.

ii) My second point … have you tried them? Do you like lightly fried mushrooms with garlic butter … the way the tasty mushroom just falls apart in your mouth? Yes? Like that? Then you’ll love escargots – fresh cooked snails are not chewy or rubbery but light delicate and melt in the mouth, oozing with herb-rich garlic butter. (old tinned and poorly cooked snails may tend towards the tougher end of the spectra!)

So what snails do we eat?

Are they really the common garden snail, sometimes confusingly called the Roman snail – Cornu (Helix) aspersum? The beautiful blonde snail, the Burgundian snail, Roman snail (see what I mean), apple snail or edible snail Helix pomatia is that commonly eaten in France. It was brought to the UK by the Romans and there are a few native populations in the wild … but they are a protected species … you can’t collect them (or even their shells!) without a licence. Whilst in France if you see snails on the menu … yum … you may also see petit gris? What’s that? …the little grey … oh yes, that is the common garden snail! Not just served individually in their shells, but eaten as snail stew, or ratatouille with tomato and herb sauce.

And of course snails and shellfish have been eaten for millennia. Oysters from archaeological sites can bear the scars (notches) from opening, mussels are commonly found in large numbers … look at the huge pile you create from just one bowl of moule mariner! So you can tell when shellfish have been opened, or modified for ornament of an artefact over the past 20,000 years …. or can you? Did you know that the shells of mussels living on the shore minding their own business, get weathered and worn? Have you mistaken that wear for human modification? Many have (see the upcoming Molluscs in Archaeology to make sure you get it right!).

On holiday in the Mediterranean – Greece, Cyprus, Malta? Commonly on the menu is a local variation of a land snail (often Eobana) stew … and yes we can prove that in the Mediterranean and Gibraltar that they been eaten for more than 15,000 years, and snail middens are common in cave sites. Explore more about the archaeology of shells, and shellfish in Molluscs in Archaeology.

How do you deal with all those shells? Those oysters on your site? How many shall I keep, how shall I recover them, record them. What’s the point? Your first port of call? Molluscs in Archaeology.

Did the land look different in past?

Archaeologists may look out from their excavation trenches and wonder what the area round looked to those inhabitants in the past. Was it forest, scrub or neatly manicured grazed grassland? Well – snails, of all things, can help! Did you know that on some archaeological sites they be the most numerous find? There are about 118 species in Britain today, but you will probably have only seen 4 or 5 of the largest, most distinctive species. Most are microscopic and only a few millimetres in size. The study of the microscopic fragments recovered from soil samples from archaeological sites can us about the landscape and land-use in the past. The reconstructions of the prehistoric landscape at Stonehenge and Avebury are largely derived from the humble small shells archaeological scientists have found.

Standard text books tell that the ancient woodland was opened up through prehistory by climate change and human deforestation. Well in the last 10 years we’ve rewritten much of that with new evidence, new ideas. So you’re not up to date. Several chapters in Molluscs in Archaeology can help you.

See the wonder of snails and shells at Conchological Society of Great Britain & Ireland.

MICHAEL J. ALLEN has run Allen Environmental Archaeology for 10 years, providing geoarchaeological and palaeo-environmental services to academic researchers and the commercial sector, and is a Research Fellow at Bournemouth University. Mike specialises in the analysis of land snails and colluvium to examine the land-use history of the chalklands.

MOLLUSCS IN ARCHAEOLOGY is a new overview of molluscs in archaeology for archaeologists, ecologists and anyone studying the natural environment. Combining authoritative overviews with a range of case studies, Molluscs in Archaeology concentrates on analysis and interpretation that most archaeologists and students can undertake and understand, and reviews the ‘heavier’ science in terms of potential, application and interpretational value.

To find out more about the book, simply click on the cover image.