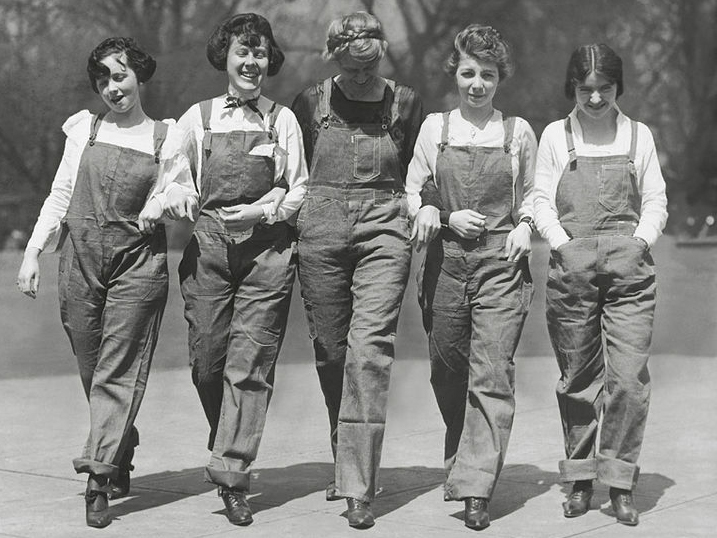 The Hemline Index is the apparent correlation of women’s skirt hemlines and stock prices, with mini skirts accompanying economic booms and long skirts accompanying economic busts. The Men’s Underwear Index is an economic index which can supposedly detect the beginnings of recovery from an economic slump by tracking the purchases of men’s underwear. It’s surprising, the things that clothing can tell us, and guest blogger ALICE PARKIN shows us what the history of trousers can reveal…

Fashion can be fascinating as a kind of living anthropology; what we wear every day is shaped and informed by our culture, and is often nowadays as swayed by style as much as practicality. What we wear, when we wear it, and where we wear it can be determined by history, politics, religion, class, gender, or employment as much as taste or the temperature outdoors.

Trousers are one of the best examples of how an everyday item can be connected to a whole host of surprising political and moral perspectives. When looking back on three complex millennia of Western and European history, it’s rare to be able to track so many developments in culture, politics, and society through one simple piece of clothing.

Classical Morality and the Trouser-Clad Barbarian

Aside from some truly exceptional examples, the poor preservation of fabric means that most of our knowledge of early clothing has to come either from depictions in art or stories recorded in written sources. We have a whole wealth of these from ancient Greece and Rome, where a firm moral code was attached to wearing such a seemingly simple piece of clothing. For the ancient Greeks, trousers were worn by Persian barbarians, the people of the modern-day Middle East, and they were considered feminine and often ridiculed. Proper Greek men wore the chiton, a form of tunic, often accompanied with a heavier cloak.

This view was matched later by the Romans, who had similar opinions about the clothing worn by the Germanic and Celtic tribes they fought on campaign. In 69 AD Aulus Caecina Alienus caused great offence when he rode through Italy wearing breeches, as these were considered foreign clothes worn by barbarians and therefore inappropriate for a Roman citizen. Interestingly, however, breeches (known as “braccae”) later became widely used in Roman society, first as military clothing and later by civilians. As with manyaspects of ancient history, the cultural ideal of the higher classes was not necessarily matched by the everyday experiences of ordinary Romans, who saw the practical benefits of the supposedly barbaric clothing.

Trousers in Europe had become something of a staple by the Mediaeval period, and were worn in a variety of ways, though often underneath other garments like tunics. The style of trouser varied depending on region and class. This period saw the birth of European courtly dress, and although for men this often featured the “hose”, these tight-fitting breeches were more like modern-day leggings than trousers. They were designed to show off the toned, well-muscled leg of the male courtiers; Henry VIII was complimented by the Venetian Ambassador as having “an extremely fine calf to his leg”, and high heels, originally worn by men, were partly favoured because they helped to emphasise and amplify the shapeliness of men’s calves.

Trousers subsequently began to echo wider political developments and modernisation movements across Europe. Peter the Great, Emperor and later Tsar of Russia, decreed in law that all Russian men should wear trousers at the turn of the eighteenth century; this was part of his wider desire to enhance Russia’s relationship with the European west.

During the French Revolution, the term “sans-culottes” was briefly used to describe the men behind the revolution. The name, meaning “without breeches”, referred to the ankle-length trousers (called pantalon) worn by working class men, especially labourers. These men formed the bulk of the Revolutionary army, and the term became synonymous with their political goals of equality and democracy. Prominent public figures then adopted the pantalon as a show of patriotism. It was the reputation of these revolutionaries which meant it was illegal for women to wear pantalon in Paris, a technicality which remained in French law until February 2013.

Probably the most famous political battle associated with trousers is the long-running campaign to make them gender neutral in Europe through the nineteenth and twentieth centuries. Women working in coal mines in mid-Victorian Wigan, known as pit brow lasses, caused a scandal when they opted to wear trousers under a skirt while working; they became a local curiosity, with photographs produced and sold to visitors, partly due to their dress and partly due to the hard nature of their work.

Trousers were especially used by female pilots in the early twentieth century, valued for their flexibility and practicality. They subsequently began to be introduced as leisurewear, with the French designer Paul Poiret the first to develop trousers specifically for women. This, however, did not lead to wider social acceptance; Katharine Hepburn’s choice to wear trousers drew press and public criticism in a time when women in America could be arrested for doing so.

As with many aspects of women’s liberation, the Second World War helped to normalize trousers and reduce this increasingly archaic attitude. Not only were trousers helpful for the many women now working in factories, there was also a movement towards accepting them as a form of female fashion.  Approval was neither widespread nor instant; Charlotte T. Reid still made news headlines in 1969 when she became the first woman to wear trousers in US Congress. The US Senate dress code forbade women to wear trousers until the rule was finally protested and removed in 1993.

These rules seem surprising and archaic today, but these steps to gender equality in dress are still being fought for; as recently as 2016 it was still a requirement for some BA staff to wear skirts instead of trousers as part of their uniform. This attitude is, however, now contrary to the norm in European culture, and there is now little to no active discrimination against women wearing trousers either in the workplace or outside of it.

This brief crash-course in fashion history illustrates how many elements of society, politics, and culture can be echoed or reinforced by the clothes we wear. While the ancient Greeks were horrified by trousers and thought them to be shockingly feminine, two millennia later the same attitude prevails for men wearing skirts – or at least in northern Europe. The story becomes much more interesting and much more complicated when the scope is widened to the rest of the world, and this stands as a reminder to how potentially harmful attitudes towards clothing are shaped by culture and custom rather than anything inherently human.

ALICE PARKIN is a PhD student at Lincoln College, Oxford. She studies art and iconography in the Ancient Greek world, and is a regular behind-the-scenes volunteer at the Oxford University Museums, with an interest in digital accessibility and public outreach.