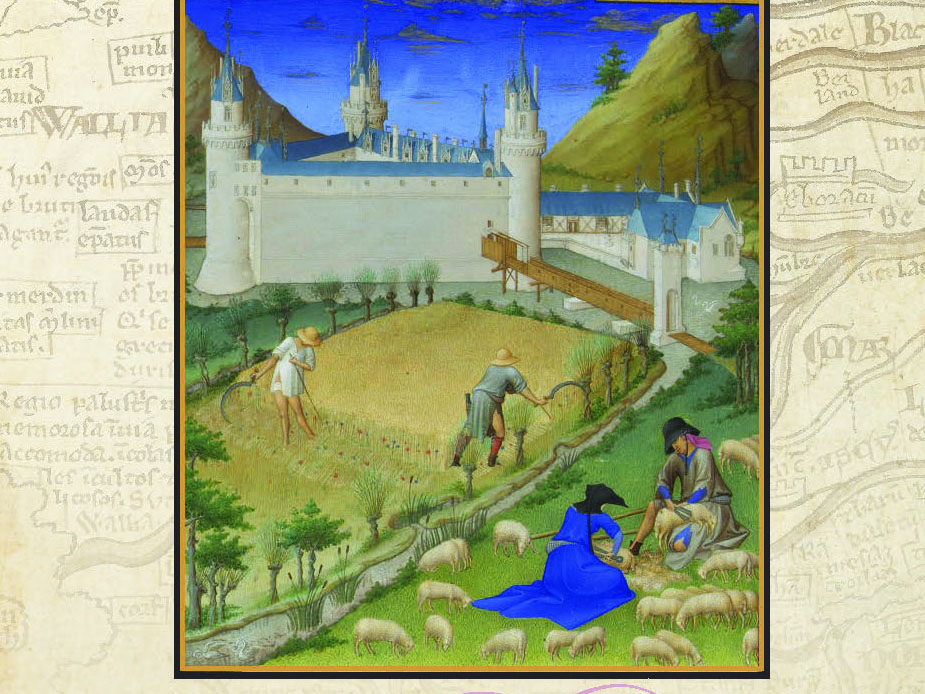 An upcoming book from SUSAN ROSE presents a fascinating new exposition on the role of the wool trade in the economy and political history of medieval England. She shares with us some of the locations central to the book, and their relevance to the medieval wool trade.

One of the best things about research for a new book is making trips to places which will feature in the book to take photographs.  For The Wealth of England I was able to go both to the Cotswolds and East Anglia, the medieval centres of the trade in raw wool and woollen cloth.  Visiting Chipping Camden and Fairford made it much easier to appreciate the wealth and the sophistication of the leading wool merchants.   St James’ Church in Chipping Camden has two remarkable treasures which are easy to overlook as they are concealed under protective covers at the back of the church. These are magnificent examples of English embroidery (the famed Opus Anglicanum). An altar frontal of the Virgin and Angels dates from the late fifteenth century and is a subtle design beautifully executed (right). The other is a cope of deep red velvet with embroideries of saints under canopies of the same date. Attending a service in this church when the nave was newly built must have been an extraordinary display of wealth, piety and communal celebration much of it due to the woolmen of the town.  Walking away down the beautiful High Street past the great  house of William Grevel ( left ), one of the most important of these men, (his  grave in the church is marked by a fine memorial brass) confirms the impression of the commercial importance of the town and the self-confidence created by its success.   At Fairford a woolman, John Tame and his son Sir Edmund, have left an extraordinary memorial in the village where they made their home.  The church was completely rebuilt by the family and contains a complete set of late fifteenth century stained glass windows aiming to present the whole story of Christianity in a series of dramatic images. The design and its execution are the work of Barnard Flowers the foremost designer and maker of stained glass in the period. He also glazed all the windows in Henry VII’s chapel in Westminster Abbey and began the immense task of glazing King’s College Chapel in Cambridge.

On the east side of the country in both Suffolk and Norfolk there are many equally rewarding examples of the importance and wealth of those connected with the wool and cloth trades.  Near Holt in Norfolk, up a rutted farm lane surrounded by modern plough-lands, can be found the ruins of Baconsthorpe Castle. This fortified manor house was originally built by Sir John Heydon , the lawyer and local agent of William de la Pole, Duke of Suffolk. Heydon apparently ran an enormous flock of sheep perhaps as many as 20,000 to 30,000 head on his surrounding pastures. The surviving east range of the castle shows clear evidence that this building was used for wool processing; it has unusually large windows to provide light for spinners and weavers.  Heydon himself had started life as a yeoman but throughout his career showed not only commercial ability but also the skills needed to navigate the tortuous local politics of fifteenth century Norfolk to the advantage of himself and his family.   Throughout the sixteenth century this site would have been a successful industrial location not the quiet spot beside an idyllic lake, the home of a family of swans,  that it is now. Later members of the Heydon family, however, squandered their wealth and abandoned the house leaving it to fall into ruin.

Sir John Heydon’s connection with the de la Poles leads naturally to a visit to the church of St Agnes at Cawston.   This was largely built by the first Duke of Suffolk in the first half of the fifteenth century and is an eloquent testimony of the rapid social ascent of the family in the fourteenth and fifteenth centuries. His great grandfather Sir William de la Pole was a   wool merchant in York. John Heydon’s patron also Sir William rose to the highest rank of the nobility and became an advisor to Henry VI. The dedicatee of the church, St Agnes, is always shown with a lamb and is pictured in this way on the fifteenth century rood screen in the church. This was perhaps an elegant way of acknowledging the origins of the wealth of the de la Pole family.  Not unlike the Heydons, later members of the family faced ruin, not from personal improvidence but from involvement in the bitter faction fighting of the Wars of the Roses.   The first Duke was in fact murdered and his body washed up on the shore near Dover. The church with its nave roof ornamented with carved angels and also with the remains of wall paintings still visible survives as a reminder of the best days of a great family.   Most English people of this era would have been well aware that there was truth in the assertion that wool was the basis of the wealth of the nation. 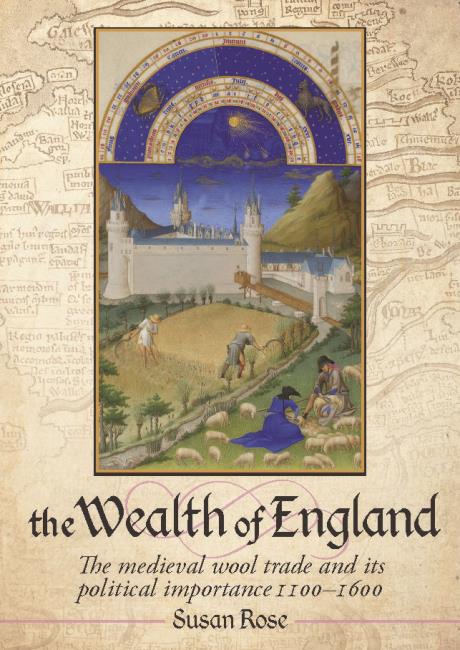 The Wealth of England presents a fascinating new exposition on the role of the wool trade in the economy and political history of medieval England. It shows how this simple product created wealth and status among men of hugely varying backgrounds, transformed market towns both economically and in architectural terms and contributed to fundamental social and cultural changes through trading links with Italy and other European countries at the height of the Renaissance.

SUSAN ROSE has written extensively on medieval economic, social and maritime history. Her previous books include The Medieval Sea (2007), Calais an English Town in France 1347-1558 (2008), and The Wine Trade in Medieval Europe 1000-1500 (2011). Her book, England’s Medieval Navy: ships men and warfare (2013) won the Anderson Medal of the Society for Nautical Research for the best maritime publication of that year. She was an associate lecturer of the Open University and a Senior Lecturer in History and a Research Fellow of Roehampton University but is now retired from teaching but not from writing and researching.