Did Arthur really pull a sword from a stone? Can archaeology shed light on myths like these, and can myth shed light on archaeology? In this extract from the newly published Myth & Materiality, JOHN WADDELL explores the potential origins of the myth of the sword in the stone.

The aim of Myth & Materiality is to promote the thesis that myth may illuminate archaeology and that on occasion archaeology may shed light on myth, using Irish evidence as a starting point. Medieval Irish literature is rich in mythic themes that in some cases at least may prompt archaeologists to take a fresh look at the materials they investigate. It is not always easy to distinguish a genuine archaism from a medieval invention – and, to complicate the picture, there is plenty of evidence of Classical and Christian influences in this material too.

Sometimes archaeology may shed light on myth. Conor Newman’s work affords yet another example. The ‘sword in the stone’ of Arthurian romance may well be the best known mythic theme today. It is certainly one of the most striking images in medieval legend not least because it echoes the motif in the 13th century Norse saga of the Völsungs in which the hero Sigmund draws the sword from a tree trunk, a dramatic subject immortalized by Richard Wagner in his Der Ring des Nibelungen.

The ‘sword in the stone’, however, is the story of the youthful Arthur who was able to pull a sword embedded in a stone to demonstrate that he was the legitimate king. Though not found in the early Welsh literature on Arthur, it does appear in Arthurian tales of the 13th century and later. While there are superficial resemblances between the Sigmund story and that of Arthur, other sources for this unusual and memorable motif have been proposed. It has even been traced back to the steppes of southern Russia where the Alans, a Sarmatian people, had a custom of plunging a naked sword in the earth – and then extracting it. Some of these folk found themselves in Roman legions and some settled in various places in the west, and their sword cult may have contributed an element to the Arthur story.  There may be no single explanation for the tale but Newman has identified one piece of archaeological evidence that is very probably a part of its genesis.

The Mullaghmast Stone is a decorated pillar now in the National Museum of Ireland. Its finely carved curvilinear motifs, including spirals and a triskele, are found on 6th century AD metalwork. Deep grooves, clearly later than some of the ornament, occur on several faces and appear to be marks created by repeatedly moving part of an iron blade to and fro in these narrow V-sectioned channels. The obvious conclusion that the stone was used as a sort of whetstone has been made before but Newman has identified a whole series of special or unusual stones that have also received this puzzling treatment.

Such blade marks ­­– and sometimes areas of burnishing or polishing due to more orthodox blade sharpening – occur on a diverse group of important stones. These include a cross-inscribed pillar stone at Kilnasaggart, Co. Armagh, that has some 55 blade grooves incised near its base on its northern side and a memorial slab with an early Latin inscription from Penmachno, Gwynedd, north Wales, with several deep grooves near its base. A reused memorial slab from Roman Wroxeter in Shropshire with a 5th century inscription in Latinized primitive Irish, that includes the name Cunorix (‘Hound King’), has one deep blade groove. Other significant stones nearing blade grooves include a number of ogham stones and high crosses. Over 30 blade marks are to be seen on the base of the high cross known as the Market Cross at Kells, Co. Meath, for instance, and this is not a case of medieval vandalism.

As Newman has shown, these and other iconic stones were deliberately selected for this treatment. While the polished areas, where they occur, are probably due to a normal lateral sharpening action, the grooves, used in a to-and-fro fashion, might sharpen the tip of a blade but would tend to blunt its edge. As he states ‘the ostensibly contradictory actions that produced respectively the blade grooves and the burnished surfaces are reconcilable when visualised through the prism of ritual and ceremony’. The polished stone bestowed sharpness and potency to a sword while the grooves that blunted its edge symbolised the return of its potency to the stone. This symbiotic relationship between sacral stone and weapon, and the ritual act of drawing a blade across a stone, are probably two of a number of influences behind the unforgettable Arthurian motif. 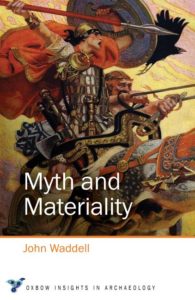 MYTH AND MATERIALITY
By John Waddell

In this latest book in the Oxbow Insights in Archaeology series, John Waddell presents a personal exploration of the notion that myth, especially as portrayed in medieval Irish literature, may illuminate archaeology, and that archaeology may shed light on myth.

John Waddell is former professor of Archaeology, NUI Galway. His work has focused on early Bronze Age pottery and burials, a major synthesis of the archaeology of prehistoric Ireland, a history of Irish archaeology, and a study of archaeology and Celtic mythology.