Do authors set out intending to write a benchmark book that may well change the face of their subject area forever, or does it simply evolve along the way? Professor ALASDAIR WHITTLE, author of the revolutionary The Times of Their Lives, describes his journey from the start of the project, right through to the publication of the book.

My new book, The Times of Their Lives, has just been published by Oxbow. What goes into the writing of a work like this? Perhaps as with many or most projects, the outcome was not quite what had been predicted at the start of it all, and I ended up arguing for a much more radical position than would have been possible for me ten or even five years ago.

The book was a long time in the making, and has involved the input of many people. In the first place, it came out of the big research project funded by the European Research Council and which, with Alex Bayliss of Historic England, we led from 2012 to 2017. (That ERC scheme has been of enormous benefit to British archaeology, and I pray that it will not be a casualty of Brexit; for which don’t blame me — I voted Remain). Before that, there was the project on causewayed enclosures published as Gathering Time in 2011 (by Oxbow: who else?) with Frances Healy and Alex, and tens of other colleagues and contributors. We started that in 2003 (with joint funding from English Heritage and AHRC). And preceding that had come what turned out to be the initial pilot study of five southern British long barrows, with Alex, Mick Wysocki and again several other colleagues (that was published as a supplement to the Cambridge Archaeological Journal in 2007).

That pilot gave me the first insights into what the more precise chronologies now achievable and their implications for better estimates of timing, duration and tempo could do for our grasp of what we have chosen to call prehistory: all eye-opening for me, though hardly for Alex, who had been working routinely with the approach in English Heritage-funded projects since the 1990s; and then Gathering Time had widened the scope and underlined the implications of all these new possibilities. In turn, the Times of Their Lives (ToTL) project opened things up further, with its multiple case studies and themes, spread over selected targets across Europe: from Serbia and western Romania up to Orkney, and from south-west Spain to the Polish lowlands.

It has been a fantastic privilege to work with so many colleagues, and the input from the wonderful teams with whom we cooperated across Europe meant the addition of local, regional and wider expertise and perspectives which we could never have hoped to match on our own. It’s invidious to pick out individual components, but the chance to work on both old and new sites of outstanding significance such as the great tell at Vinča, the stunning new settlement complex at Alsónyék, Orkney settlements in our own Late Neolithic, and the mortuary and other complex at Valencina de la Concepción, was amazing. Okay, we saw enough airports to last us a very long time, but it was worth every effort — and was also highly productive: by the time we have finished everything, we will have published well over 40 papers and chapters, many of them pretty long.

I wrote the new book on my own, as had been the plan from the point of application to the ERC, trying to digest all this into one coherent (and I hope readable) statement, but really it reflects the input of the very large, collaborative network which I have tried to sketch. Our many joint papers had already explored all manner of interpretations, every time trying to push what more precise chronologies brought to the party. At the time of application, we had seen ourselves as being able to add useful refinements to the chronological edifice for the European Neolithic created by over a century of research. By the end, we claim we had shown much more radical possibilities. For me, goaded by Alex and Frances and the others, the bottom line was that instead of a generalised Neolithic past which we have all assumed to have a lot of continuity and slow change, come a series of individual sequences — sometimes in sync with each other, sometimes not — which are often much more dynamic, fast-changing and even punctuated and interrupted, than we had previously imagined. We can routinely get down to the timescales of lifetimes and generations, if we do the right things in the dating and modelling process. This allows us to attempt to take the pre- out of prehistory (a slogan we had used in Gathering Time). This should also enable us to be much more specific and particularistic, and to get away from prehistoric archaeology’s previous addiction to general models. I argue in the book that we could profitably align ourselves with history, in the sense of creating and interpreting detailed narratives about past lives, from often imperfect and always incomplete evidence, and attempting to address particular sequences and contexts — hence the Hunting history in my subtitle. 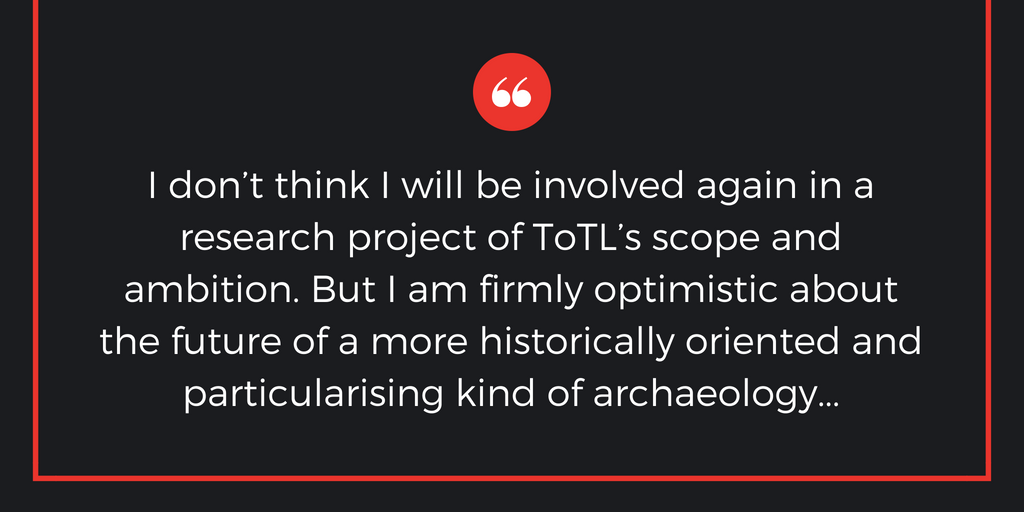 I have recently retired and while still active across various enterprises I don’t think I will be involved again in a research project of ToTL’s scope and ambition. But I am firmly optimistic about the future of a more historically oriented and particularising kind of archaeology — perhaps early history may prove to be a better label. Combined with the best of advancing archaeological science, which I briefly note in my final chapter, there are countless opportunities now to get close to all manner of temporal and biographical scales. Which ones suit best, will depend on the kinds of narratives we wish to create — and these will vary from scholar to scholar and from project to project. But if the discipline as a whole embraces the quest for establishing detailed and precise chronological frameworks over whole regions, the landscape of interpretation can be further transformed. I think a very exciting future lies ahead. 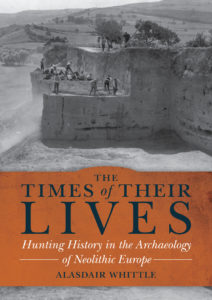 The Times of Their Lives: Hunting History in the Archaeology of Neolithic Europe
By Alasdair Whittle

A new history of Neolithic Europe, with major implications for the whole of archaeology, using Bayesian statistical analysis to bring dating down from the long-term to the span of lifetimes. Following on from the revolutionary and award-winning Gathering Time, this is the career culmination work by one of the world’s leading prehistorians.