What looks at first glance an unpretentious small market town, probably founded around AD 1200, is at second glance something more special and unusual. This extract from ‘Faversham in the Making’ begins to scratch the surface of the town’s secret history through the ages.

Arriving by car, you would probably come via the M2, leaving at junction 6, turning left onto the Faversham to Ashford road, and driving past ribbon development to the busy Canterbury Road. Crossing at an awkward junction, you drive down a tree lined road with late Victorian houses of familiar type. The road snakes to the left to go underneath a railway bridge. Then you swing to the right and take the first left turn: you are now in Preston Street, the closest Faversham possesses to a High Street. At this point, park and walk and be joined by visitors arriving by rail. Going down Preston Street, you meet another awkward T junction but to the left you will see the stilted Guildhall and, if this is a Tuesday, Friday or Saturday, the bright pavilions of market stalls selling fruit and veg, fish, baked goods, clothes, flowers, bric a brac.

What have you made of the town so far? Not large (the population at the 2011 census was 19,316) with modest shopping facilities and, so far, no particularly large buildings. There are no up-market boutiques or fancy delicatessens or trendy, expensive, children’s clothes shops, but there are plenty of well-kept pubs, small restaurants, charity shops and small specialist shops run by enthusiasts.

If you turn right at the Guildhall you will go along wide, cobbled Court Street and then into Abbey Street. Now there are some large buildings. In 2017, those on the right house a TESCO and an ASK restaurant. Tucked away are many attractive apartments. On the other side of the road, very imposing if you have come into town via the Ospringe Road, is another set of large and complex buildings, and these are still in their original use as the Shepherd Neame brewery: the buildings occupied by TESCO on the eastern side were owned originally by Rigdens brewers, finally Whitbreads, closed in 1990, to be converted sensitively to these other uses.

Along a side street to the right is the parish church, St Mary of Charity: it has an unusual openwork spire and lots of fascinating features. The sheer size of St Marys, the largest parish church in Kent, might seem over the top for such a seemingly modest little town.

Walking down Court Street and Abbey Street, you will begin to see many handsome brick houses and some timber framed ones with jettying. Finally, turning left opposite the Anchor pub brings water into view: you are now on Standard Quay, with black wooden warehouses and moored barges on Faversham Creek, all very picturesque. You will probably notice that the inner warehouse although timber framed with a brick finish, rests on a stone foundation wall about 1 m high.

So far, you have a charming little town, not particularly wealthy or fashionable but comfortable in its identity. It has no walls, no castle or cathedral: medieval foundation, you might assume. Now, however, let us rewind and look at your route into town with other eyes.

The turnoff at the M2 motorway (built 1962) takes the visitor onto an ancient route way, a droveway across the North Downs from Faversham to Ashford. As you drive on northwards towards Faversham, about 300 m on your left is a medieval manor, Perry Court, listed in the Domesday Book nearly 1000 years ago. In the back garden of one of the houses on your right, a boy digging a hole for fun in 1965 found late Iron Age pottery, over 2000 years old.

You turn briefly onto the Canterbury road. This is no ordinary road. This is that most famous of Romano-British Roads, Watling Street. It ran from Londinium via Durobrivae (Rochester) and Durovernum Cantiacorum (Canterbury) to Rutupiae (Richborough) and Dubris (Dover). There have been many important Roman occupation period finds nearby, and about 1 km to the west was an informal Roman street settlement known as Durolevum. Turning right into the Mall, you are driving along what used to be the top end of Preston Street until the coming of the railway in 1858–60. As if the arrival of the railway was not dramatic enough, in the process of excavating the embankments an exceptionally rich early Saxon cemetery was uncovered. Large scale brickearth removal in the same area in the second half of the nineteenth century yielded yet more precious loot – gold and garnet brooches and buckles, gold headdresses, swords, necklaces.

So far, then, we have Late Iron Age, Roman, pagan Saxon and Saxo-Norman and you have not even reached the town centre.

The Guildhall dates from 1574, with the current superstructure dating from 1819. The market itself, however, has a much longer history: Faversham is listed in Domesday as one of only two Kentish towns to have a market. Faversham was also at that time a Kings Manor and the lead town for an Anglo-Saxon Hundred. The first documented use of the name and its identity as ‘the Kings little town’ is in a charter of King Coenwulf dated to AD 811.

The regal connection gets stronger. Remember that stone wall at the base of the warehouse on Standard Quay? There is no natural building stone in the Faversham area apart from flint nodules: this stone was mostly imported from near Maidstone with some yellowish pieces coming from quarries near Caen in Normandy. This is recycled stone from a high-status Norman building. Five hundred years ago, just south-east of Standard Quay, were the cloisters and functional buildings serving a huge Abbey Church in which King Stephen, his wife and son were buried. The great Royal Abbey of St Saviour, founded in AD 1148, dominated the town (or tried to) for nearly 400 years. Now only the splendid Abbey Barns (to the east, about 300 m/300+ yds away) and the Abbots Lodge (you passed it along Abbey Street) survive to tell the tale although the stones can be found in many a nearby wall as well as the one on Standard Quay.

Finally, there is that attractive waterway Faversham Creek, with plenty of leisure craft at moorings and an ever-increasing amount of waterside housing. Yet only 50 years ago, the area opposite Standard Quay was occupied by a shipyard, where boats were launched sideways into the creek. Photographs of the creek from the early 1900s show large ships bringing up cargoes of wood for the timber yard or coal for the Gas Works at the Creek head. Only 20 years ago, in 1997, the creek on the town side and around the Basin was still lined with industry.

The long-term importance of Faversham as a port is marked by its membership of the Cinque ports. Faversham has been a ‘limb of Dover’ for at least 800 years and enjoyed the independence and duties of such a position. Yet back in Roman times, sea level relative to the land was lower than now. Go back further in time to just after the last Ice Age – which is only around 11,000 years ago – and the sea was far away. Our knowledge of the people living around here at that time is much cloudier than that of the medieval Favershamites, but that they were here is beyond doubt, proven by the abundant flintwork they left behind.

In short, what looks at first glance an unpretentious small market town, probably founded like so many small Kentish market towns around AD 1200, is shown at the quickest second glance as something more special and unusual. It is easy to overlook places like Faversham, especially as ten miles away is one of the United Kingdom’s most famous historic towns, Canterbury. This book is an attempt to bring together the earlier narrative for this small place and its hinterland: the voice of small and indomitable towns will be heard. 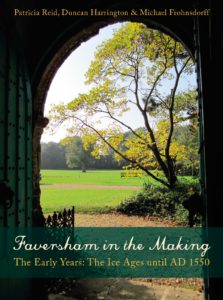 Faversham in the Making
The Early Years: The Ice Ages until AD 1550

This book presents a lively description of the early history and archaeology of the picturesque Kentish market town of Faversham. It combines archaeological, historical, photographic and cartographic evidence to paint a new picture of the less well known periods of Faversham’s history, from Prehistory up to AD 1550.