It might seem that the large quantities of plain pottery found at Neolithic sites can’t tell us all that much. But as OLIVIER NIEUWENHUYSE, editor of ‘Relentlessly Plain: Seventh Millennium Ceramics at Tell Sabi Abyad, Syria’ explains, this pottery can shed light on everything from climate change to social development.

Recently archaeologists have become interested in when, how and why people first adopted pottery in ancient Western Asia. Not that this research interest is altogether new: back in the 19th century, armchair-theorists speculated on the role of pottery in the emergence of ‘Civilization’. The Middle East has been widely regarded as a centre for the early emergence of the craft. Until very recently, however, solid field data were excruciatingly scarce and well-documented early ceramic sequences virtually non-existent. Now, this has changed.

Over the past two decades, archaeologists have made unprecedented advances, on important sites including Shir, Tell el-Kerkh, Tell Nebi Mend, Tell Halula, Seker al-Aheimar in Syria, Mezraa Teleilat, Akarçay Höyük, Domuztepe, Salat Cami Yanı and Çatalhöyük in Turkey, and Yarim Tepe, Umm Dabaghiya and Sotto in Northern Iraq. This work has made clear that across Upper Mesopotamia Neolithic, communities adopted the sustained production of pottery between ca. 7000-6700 cal. BCE in the form of extremely limited quantities of well-crafted, mineral-tempered, visually conspicuous containers (for a synthesis, see The Emergence of Pottery in Western Asia). In the subsequent half millennium or so, this early horizon gave way to assemblages dominated by coarse, plant-tempered, mostly plain ceramics in increasing quantities. Relentlessly Plain presents the results of studies on the early ceramics from the site of Tell Sabi Abyad in northern Syria.

A Perspective from Tell Sabi Abyad

Tell Sabi Abyad lies in the valley of the Balikh River, a tributary of the Euphrates between the Turkish-Syrian border, and the city of Raqqa. Earlier work at the site had focused on the emergence of the Halaf culture in the early 6th millennium BC. Between 2001 and 2008, excavator Peter Akkermans shifted focus to the western parts of the mound. Here, much older levels came to light. The excavations documented a long, continuous sequence from the Pre-Pottery Neolithic until the Halaf period (later 8th millennium to early 6th millennium BCE), supported by a robust program of radiocarbon dating. Some of the larger exposures provide spectacular perspectives on the layout of a later Neolithic village, bristling with a rich material culture.

Our initial interest focused on the archaeology of climate change. Specifically, we wished to understand the cultural repercussions of the so-called 8.2 ka abrupt climate change event. Between ca. 6200 and 6000 BCE, this event caused unprecedented drought, potentially devastating Neolithic farming communities. How might changes in container technology have facilitated Neolithic communities to adapt to climatic threats? Late Neolithic societies changed profoundly during these two centuries. Some of these changes were adaptive: the introduction of pottery jars facilitated efficient bulk storage, for example, while the development of cooking vessels allowed the processing of dairy products.  Pottery facilitated survival. However, a closer look at the ceramic sequence showed that the case of climate change causing culture change was far from straightforward: some key ‘adaptations’ began some time before the climate event. The climate anomaly appears to have accelerated trends that had already begun for reasons unrelated to climate change. These considerations resulted in a book on Climate and Cultural Change in Prehistoric Europe and the Near East (with Peter Biehl). I then decided that the ceramic analysis merited a volume on its own.

The 7th millennium BC was an era of profound cultural transformations in the ancient Near East. This began with the sustained adoption of pottery c. 7000 BCE, followed by the slow advance of the new craft as pottery containers became increasingly common. Pottery changed dramatically in the course of this long trajectory. Initially, ceramic containers were visually conspicuous, occasionally decorated, but masses of relentlessly plain pottery characterise subsequent stages. The initial pottery vessels were rare, small-volume containers with (presumably) a limited range of uses, but in time they diversified in every possible aspect as important social, economic and ritual activities became increasingly dependent on pottery containers. Over the course of the millennium, prehistoric communities began to store surpluses, cook food and drink, and send symbolic messages via the medium of pottery vessels.

Importantly, however, none of these innovations seem to have been foreseen when Neolithic groups first adopted pottery. Tell Sabi Abyad provides an important reminder that (prehistoric) innovations generally do not come about because of purposeful engineering towards some ultimate goal. Rather, the long-term effects represent unintended outcomes of decisions taken earlier on for wholly different reasons. Neolithic ‘inventors’ in the early 7th millennium BCE did not set about to ‘revolutionize’ their societies with efficient technologies for storage, cooking and symbolic messaging. Tell Sabi Abyad and other 7th-millennium sites in Upper Mesopotamia now allows us to follow the slow, incremental changes in close detail and ask: how do these container innovations chime with broader transformations in Neolithic subsistence, social organization and ritual? This fundamental question may guide researchers in the years to come.

I dedicate this book to all of the many peoples of Syria, in remembrance of their warm hospitality and support over the years. This book looks forward to a brighter future: We’ll be back. This study represents a belated outcome of the project Material Continuities, Renewals and Cultural Transformation, funded by the Netherlands Organization for Scientific Research (NWO, dossier 360-62-040). The publication became possible with a gift from the Stichting Nederlands Museum voor Anthropologie en Praehistorie (SNMAP). 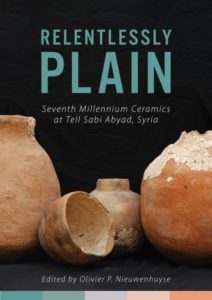 Presents a multi-disciplinary analysis of a crucially important, assemblage of Neolithic pottery , radiocarbon dated to the 7th millennium BC, from the Tell Sabi Abyad, Syria, which demonstrates development from the earliest adoption of ceramics to local production.