Oxbow Books authors GAYNOR WESTERN and JELENA BEKVALAC discuss what the analysis of human skeletal remains from the Industrial Period in Britain can tell us about ourselves and our health today.

Setting off on a three year project to examine the human skeletal remains of over 2,200 individuals from across the country might seem like an ambitious challenge. Hundreds of emails and many treks to archaeological archives, universities, museums and to archaeological contractors across the country ensued, all of whom had graciously offered to assist us. In the end, we created an archive of over 16,000 digital radiographic images. But why did we need to look at so many skeletons? After all, osteoarchaeological analysis is by now a well established field and human skeletal remains are almost omnipresent on the round of the usual archaeological TV programmes. And why the Industrial Period? Don’t we know most of this historical period stuff already?

We set out with a different perspective. What we wanted to know was what the analysis of human skeletal remains could tell us about ourselves and our health today. We spend a lot of time at work sitting in front of computer screens, relaxing by TV screens, commuting behind the wheel of a car or, if you are lucky, sat on a train, though the chances are you’re more likely to have crammed yourself into an overcrowded carriage, exposing yourself to the latest rounds of colds and flu. Running late and half-starved, you’ll pick up some sort of pre-packaged food and a cappuccino on the way. How has it all come to this in 21st century Britain? According to the social scientists of the 1960’s, we should be living the good life with more leisure time at our disposal than ever before.

Technology and industrialisation are instead these days frequently blamed for our injurious lifestyles. We’re too sedentary in our jobs, we’re not eating enough fresh fruit and vegetables, preferring to slap a ready meal in the oven and buy oven chips. And we’re eating far too much sugar, only readily available for the past couple of hundred years. Now it’s everywhere. It’s almost become impossible to avoid it. It’s no surprise to wake up to yet another news bulletin on the radio about rising levels of obesity and diabetes. Nor to read again about the health dangers from increasing levels of air pollution from vehicles snared up in traffic jams, people and goods commuting further and further on the roads.

So is industrialisation really to blame for our modern ills? How long have these health trends really been going on? As much as you might think medical records would help us to understand this, unfortunately, it is frequently not the case. Terminologies and diagnostic criteria have changed, not surprisingly given the rapidly expanding field that medicine has been over the past 200 years. The only objective source of information is the bodies of people from the past themselves, more specifically those from both the Industrial period and the preceding eras, which help us understand what industrialised lifestyles were, how health was impacted and whether that impact has continued to influence our health today. These are critical areas of research for our overall understanding of how we are evolving as modern humans in relation to our living environments, how our very DNA is adapting to our lifestyles that we as human beings are continually modifying.

To understand the history of our health in terms of how we have got to this point, we devised a project to set about gathering previously unrecorded data from the archives of archaeological skeletal remains. We needed to look deeper than previous studies. Some questions we wanted to answer about cancer, obesity and age-related osteoporosis could only be looked at by examining large numbers of remains using the standardised recording of digital radiography and CT scanning of the modern medical world. Industrialisation itself, of course, is not a uniform process. It has affected different populations in the UK in different ways, promoting new ways of living and bringing others, sometimes centuries old, to an abrupt halt. London, as the largest, most densely populated metropolis, formed a nexus of Industrial activity in Britain, requiring a surplus of fuel, food and people from the rest of the country to feed its economic growth. London therefore is an exemplar of how industrialisation impacted health in a big city.

To be able to understand this impact fully, we needed to explore the data from the diverse populations within London looking at the influence of social status on health, as well as to compare the data from London as a whole to small towns and villages outside the City. Our analysis covered a range from small isolated hamlets such as Fewston in West Yorkshire, small rural market towns like Upton-on-Severn in Worcestershire, to more urbanised industrial small towns including North Shields, Barton-upon-Humber and Swinton, Salford. We then compared these results to health trends seen in populations inhabiting all these places today.

The results were remarkable, candidly illustrating the immense changes we have experienced in health over time, how some diseases have evolved in their manifestations and how changes in health over time can be complex, counter-intuitive and interdependent between different populations all existing within an over-arching economic infrastructure. On the other hand, a number of disease patterns were worryingly consistent in some populations, despite our assumed social progress; though specific factors might have varied over time, the underlying social causes of these conditions had not. As the project progressed, it was revealed by Public Health England that for the first time in many years, there has been a decline in age expectancy. The bubble of our ever-improving health throughout the 20th century has burst. The results of this timely osteoarchaeological research project serve as a sharp reminder that if our health is to flourish in the future, we need to be examining the long term benefits and costs of the way we live, both to ourselves and to our surrounding environments.

Find the Impact of Industrialisation on London Health Project on Facebook and on the Museum of London website, and browse the repository of 3D models. 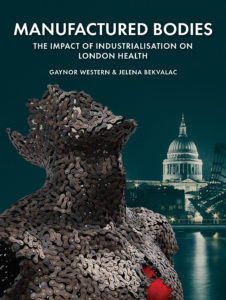 Manufactured Bodies
The Impact of Industrialisation on London Health

By Gaynor Western and Jelena Bekvalac

An attractively presented overview of the results of research on 2,000 skeletons which reveals the impact of the Industrial Revolution on human health in London and beyond.

GAYNOR WESTERN is an osteoarchaeologist at Ossafreelance and undertakes funded research projects in several areas of the field, including investigating pathology trends in the past using digital applications.

JELENA BEKVALAC is a Curator of Human Osteology at the Centre for Human Bioarchaeology, Museum of London. She has worked at the museum since 2003 and has research interests in the bioarchaeology of the medieval and post medieval periods.