Oxbow Books and Casemate UK author SIMON ELLIOTT discusses his forthcoming book, Old Testament Warriors, an ambitious, accessible book which explores the history of conflict from c. 9000BC to 500BC.

My name is Dr Simon Elliott and I am an historian and archaeologist, with nine books currently on sale, all on themes regarding the ancient world. Oxbow Books has published Empire State: How the Roman Military Built an Empire, and others are with the fabulous Casemate UK, including Roman Legionaries and Julius Caesar: Rome’s Greatest Warlord. I have also just delivered the manuscript for Romans at War which will be published later this year.

Very excitingly, my next book for Casemate is released in the UK on Kindle on the 20th of May. Called Old Testament Warriors, its bold ambition is to detail conflict from the beginning of warfare itself (as I perceive it) around 9,000 BC through to the onset of the Classical period around 500 BC, in an area encompassing the eastern Mediterranean, Levant, Mesopotamia and modern Iran. These are the lands that feature predominantly in the Bible and many other contemporary references.

In terms of scope, the chronology and geography covered by the book are vast. I therefore chose to specifically focus on those civilisations that are not only best known to us today, but which also have the most complete datasets to support the narrative. The chapters are therefore broadly chronological, following specific cultures when they were at the height of their power. Each first details the political and military history of the region covered, and then each protagonist’s military establishment.

The first chapter covers the origins of warfare (where I define the term), and then focuses on the first civilisations of Mesopotamia, these including Sumer, Akkad and the 3rd Dynasty of Ur. This includes the amazing stories of the great figures of the earliest history including Sargon of the Great, the world’s first true Empire builder.

The second chapter then looks at the early history of Egypt, Nubia, Canaan and Libya. We see here how Egypt came into being as a political 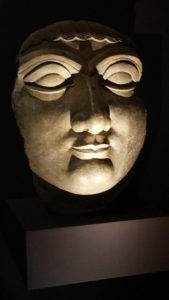 entity, and then investigate its first campaigns of conquest and survival. The third chapter moves onto the amazing story of the origins of chariot warfare, this technology (then very advanced) originating in the Central Asian Steppe from where it was adopted by the Hurrians. These peoples were then the vector of transmission for this game changer to the Near East, where it was next adopted by the Hyksos and then Mitanni civilisations. The fourth chapter then turns to Europe with the Minoans, Mycenaeans and Sea Peoples, the latter a phenomenon resulting from the Late Bronze Age Collapse. The fifth chapter returns to the Levant and the Hebrew kingdoms, telling the stories of the great warriors of the Bible, while the sixth and final chapter looks at the mighty empires of Babylon, Assyria and Babylon. Here you will find the stories of the great later Biblical kings Ashurbanipal and Nebuchadnezzar II.

One of the most exciting aspects of researching and writing Old Testament Warriors was diving into a rich set of data to fully flesh out these incredible cultures and peoples of distant prehistory and then history. That used in the book includes the written word (ancient and primary sources, epigraphy, early accounting practices and graffiti, often for the first time ever), archaeology, analogy and (where appropriate) anecdote. For the former we are blessed with multiple sources from many of the cultures referenced. This includes of course the Bible itself, but also many other contemporary references including Egyptian hieroglyphics on wall friezes and papyrus scrolls, cuneiform writing tablets from across the entirety of the Levant and Mesopotamia, and the detailed and often very graphic wall reliefs of the palaces of the rulers of Assyria and elsewhere.

Here in Old Testament Warriors you will find all you need to delve into this incredible period of world history as farming first arrived in the Near East when the Natufian period transitioned into the Neolithic, and then the first great civilizations and cultures rose and fell over an 8,500 year period, paving the way for the arrival of the Classical World.

Old Testament Warriors: The Clash of Cultures in the Ancient Near East
By Simon Elliott

A short history of warfare in the age of the Old Testament including many ancient cultures from the Middle East such as the Sumerians, Akkadians, Philistines, Hittites and Hebrews.

Available to pre-order through Oxbow Books