Margarita Díaz-Andreu tells us how her personal journey inspired her most ambitious project yet: Interdisciplinarity and Archaeology, the first book to explore the relationship between archaeology and other branches of knowledge.

Universities’ greed for external funds is resulting in the disappearance of the lone researcher. This is not always good for research, in fact, it is detrimental to the humanities. Yet, it can also yield positive results. This is a story of discovery and the finding of unexpected perspectives, led by a funded project.

In March 2016 the call for Research and Development projects was announced. This is one of the main drivers of academic research in Spain. The project I had led for the three previous years, Archaeology without Frontiers[1], was coming to a close. Given the success of this project on the history of archaeology, I wanted to maintain my team and find a new topic to investigate. Yet, what topic would allow an international group of scholars to work together in tandem? I have mentioned in several publications that the experiences that scholars go through in their lives inspire what they research and write about. Indeed, when deciding on the new project, the inspiration came from my own practice. At that time I had been publishing about archaeoacoustics for four years in some of the best indexed journals, and the subject had already attracted a Marie Skłodowska-Curie fellow to come to Barcelona to work with me.

So, almost by chance, I had found how easy it could be for scholars working in interdisciplinary subject areas to publish in indexed journals. In my case, it had also allowed me to bring new researchers to my research group. I had discovered that to specialise in an field mixing knowledge from two disciplines– archaeoacoustics, palynology, archaeometallurgy and the like – seemed to be a key to success. It had also become apparent to me that the word ‘interdisciplinarity’ was in every call for funding, from local organisations to the most influential international sponsors. Compared to my memories of the requirements of funding bodies in my early career (in the 1980s), it seemed that there had been a shift. But, did I remember correctly? What was the root of this fascination with mixing up skills from different sciences? A search for information in the history of archaeology led to practically nothing.

“Practically nothing” does not mean a complete absence of research. For a long time it has widely been accepted that that physical anthropologists collaborated with archaeologists in the early years of archaeology. Also, natural scientists, in particular geologists, had been central to the acceptance of human antiquity. And by 2016 some historians of archaeology had already started to think about the combination of archaeology and other sciences: Marc-Antoine Kaeser’s research on the Swiss Édouard Desor had taken him to think about the role of natural scientists in archaeological investigation. His work had then been complemented with that of Géraldine Delley who looked into the early years of the radiocarbon dating technique and its effects on archaeology. Kristian Kristiansen, most likely also influenced by his own immersion in interdisciplinarity, had also been thinking about how blending disciplinary barriers had been central to the development of archaeology. This research on interdisciplinarity, however, had been isolated and there had not yet been an attempt to put all these strands together.

The project Archaeology and Interdisciplinarity: Archaeological and Historical Research on Interdisciplinarity in the History of Archaeology (19th and 20th Centuries), briefly called InterArq[2], was funded by the AEI[3], the Spanish State Agency for Research. InterArq drew together an international group of twenty two scholars based in Australia, Canada, France, Italy, Portugal, Spain and Switzerland. From 2016 to 2019, several talks and sessions were organised, the most important being a one-day seminar[4] coordinated together with Laura Coltofean and held in Barcelona. From it three publications were organised. Two of these concentrated on Spain; the first published in a special issue of the Veleia journal[5] and consisted of most of the presentations from the seminar about interdisciplinarity in Spain. The second one, published by the University of Barcelona, is a very unique book: it collects in autobiographical form the experiences of almost fifty interdisciplinary scholars from Spain belonging to different generations and branches of knowledge. This has provided an extremely rich flow of data summarized in a last chapter in the volume. A more international view is provided by a third volume where a wider range of countries are included: Interdisciplinarity and Archaeology: Scientific Interactions in Nineteenth- and Twentieth-century Archaeology has now been published by Oxbow Books.

What has this historical adventure into interdisciplinarity revealed? The first lesson has been that, despite not being explicitly acknowledged in the histories of archaeology, from its very inception archaeology has been exchanging knowledge with other disciplines – the lawyer who could read Roman legal texts, and the botanist who could help to reconstruct ancient climates – and these are only two of many possible combinations found in the nineteenth century. It was after the Great War that Quaternary Research put, for the first time, archaeologists together with geologists, botanists, zoologists and geographers as researchers of the ancient past and universities began to hire specialists in natural sciences in archaeology departments. This development only spread out throughout archaeology after the Second World War, when a strong belief in the natural and hard sciences fostered the exchange of ideas between them and the study of the past. The term interdisciplinarity was, however, only accepted in the 1970s and it took several years for the information provided by interdisciplinary scholars to stop being considered secondary. Since then, its growth had been unstoppable and in the 2000s a new term was created, ‘archaeological science’, with an increasing number of archaeologists converting to it.

Historians of archaeology have largely remained silent about the growing presence of interdisciplinarity. This could be explained by the war between processual and post-processual archaeologists putting the focus on theory instead of the practice of the discipline. While post-processual thinkers like me were discovering the enthralling socio-political context of archaeology, their colleagues were putting in practice a whole new range of scientific methods to the study of the past. Development of new knowledge is not the only reason behind this movement towards science. Pressure for scholars to obtain funding, as mentioned at the start of this blog, may well be a key component in this shift: it is easier to obtain economic support for projects with a scientific component than for those only humanities-based. Correspondingly, archaeologists’ approach to the sciences has brought welcome resources to the discipline. Young, ambitious scholars also find it easier to be welcomed into the profession thanks to their skills, and this has now been happening for several decades. These no longer young scholars are now senior, and the ball keeps rolling…

In my case, this project has taught me a lesson: change the lens with which you are analysing your subject and you will find a completely different story. And, the result can be fascinating! 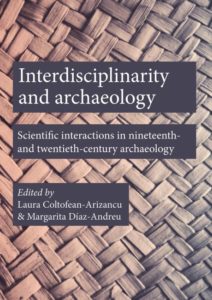 Explores the relationships between archaeology and other branches of knowledge in the natural and social sciences.