In anticipation of his new book, Cannon Played From The Great Fort, Richard Israel reveals how Sandal Castle, alongside other castles deemed ‘weak’ in British history, were actually essential as social strongholds in the midst of uncertainty.

Whilst the title of this blog comes from the words uttered by Richard in William Shakespeare’s play Henry VI (Act 1, Part 3, Scene 2), the words resonate whether they are used in the context of the War of the Roses (1455-1487), or the First Civil War (1642-1646), as both conflicts were concerned with how and who governed the country. The scene itself took place at Sandal Castle in West Yorkshire.

Sandal Castle sits above a crossing of the River Calder, and is a few miles south-west of Wakefield. It was originally a motte and bailey castle built in the 12th century and was modified during the reign of Richard III (1483-1485). At the commencement of the Civil War, it was garrisoned by the Royalists. The decision to fortify the castle is unusual. This is because its geographical position in relation to Wakefield means that neither was able to provide an effective cover for each other, and Pontefract Castle, a stronger castle in this period, is located less than 10 miles (16km) away.[1]

In my first book Cannon Played from the Great Fort: Sieges in the Severn Valley during the English Civil War 1642-1646, we see the importance of the castles of Bridgnorth, Bristol, and Shrewsbury to their respective sieges. Here it is important to contextualise their impact with another castle – that of Sandal. Bristol Castle, Bridgnorth Castle and Shrewsbury Castle have all been described as weak and shadows of their former selves, and all required work and repair.

Examining Sandal Castle, the archaeologist Rachel Askew suggested that the fortification represented a social stronghold, rather than a military position. The Siege of Sandal Castle lasted for just over two months, from July until 30 September 1645, at which time the Parliamentarians were successful. What we therefore have is a castle of limited military significance being fortified and manned by the Royalists, which was last significant militarily in the War of the Roses centuries earlier.[2]

The reason that Sandal Castle is discussed here is that it is an important reminder that castles are not purely militaristic features in the landscape.[3] Although it appears that the early post-medieval period was the castles ‘last-hurrah’ as purely military features, the evidence illustrates that the castles were significant and important features in the landscape. Relating this to our case studies in Cannon Played from the Great Fort, the antiquarian Leland in the 16th century described Bridgnorth Castle as ruinous. That ruinous castle survived a three-week siege. Bristol Castle, despite being described by the engineer Bernard de Gomme as weak, was a vital instrument for both sides, and was never directly assaulted. Lastly, it is important to remind ourselves that it was the modern 17th century earthwork sconce and the medieval castle that were the last structures to surrender during the Siege of Shrewsbury.  From a purely strategic and tactical perspective, the case study of Sandal Castle, like the castles of Cannon Played from the Great Fort, demonstrates that medieval castles were able to ‘stand up’ to the punishment of 17th century artillery.

Therefore, the battle for England, indeed the fledgling United Kingdom during the First Civil War, took place, in part, in and around the medieval castles-built centuries earlier. The fact that the Siege of Sandal Castle lasted for a little over two months is a testament to the people inside defending it for the Royalist cause, as logistical problems involving the transportation of cannon from Hull was the main issue for the Parliamentarians. In this case, once the artillery arrived, a breach was made in the walls forcing the Royalists to surrender.[4] Nevertheless, further research regarding castles in period area is required, as it concerns the crown of England. 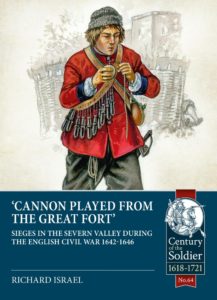 Cannon Played From The Great Fort: Sieges in the Severn Valley during the English Civil War 1642-1646
By Richard Israel

This book examines through historical and archaeological research the sieges of Bristol, Gloucester, Worcester, Bridgnorth and Shrewsbury during the First Civil War (1642-1646).

Biography: With a BA(Hons) in Archaeology, an MA in Landscape Archaeology, and an MPhil in Archaeology from the University of Bristol, Richard Israel is exceptionally qualified within his field. Drawing on years of dedicated research and several published papers on the English Civil Wars, Cannon Played from the Great Fort is his first published book.

Available to order through Casemate UK

Askew, Rachel, M. C., ‘The House of Every One’: The Consumption of Material Culture in Castles during the English Civil War (Unpublished PhD: University of Sheffield, 2013).