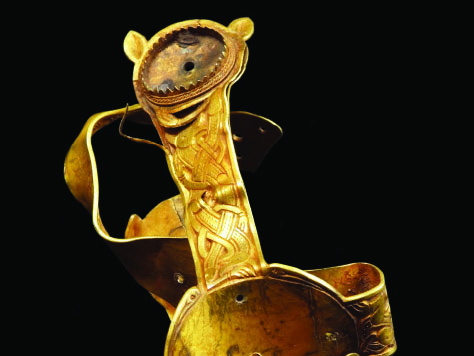 Many of the books published by Oxbow Books are edited volumes or collections of contributions from various authors. These collections – often from conference proceedings or academic lectures – allow a theme to be explored through various different perspectives, and using different disciplines, methodologies, or evidence.

But how are these volumes put together? GALE OWEN-CROCKER tells us how editing such a volume can be a little like herding cats.

Transformation in Anglo-Saxon Culture, edited by Charles Insley and Gale R. Owen-Crocker, brings together five Toller lectures delivered to the Manchester Centre for Anglo-Saxon Studies between 2009 and 2014.

The lecture topics cover the archaeology of the fifth to sixth centuries; the eclecticism of King Alfred’s court; recurrent themes in Anglo-Saxon art over six centuries; the visual impact of the book; and the contexts of the Old English poem The Dream of the Rood from its appearance on an eighth-century stone cross to an eleventh-century metal cross to a late-tenth century manuscript, arguably being re-used by a group of pilgrims a couple of generations after it was written. The common factor is that all the lectures speak of transformation, the Anglo-Saxon ability to rework older material for new times and the necessary adaptation to new circumstances.

Inevitably, given that the Toller lectures are annual, the collection of five of them took a considerable amount of time, after which all but one author and my co-editor, Charles Insley, had moved on in life, mostly to ‘retirement’ from their academic posts. Old academics don’t really retire, of course, they simply carry on working at the subject they love wherever they find themselves; they still take off for conferences and lecture tours and are often occupied with writing up accumulated research or newly discovered material. Other aspects of life intrude with, it seems to me, increasing frequency and urgency as the years go on. People move house, change emails, acquire grandchildren. They suffer bereavements. They get ill, sailing through life-threatening conditions with amazing aplomb; and (my own particular pleasure) they take longer and longer holidays to remote places from where they don’t answer emails. Given this situation, to organize the updating and illustration of the Toller lectures by their authors was about as easy as herding cats. I hope they are purring at the result.

Transformation in Anglo-Saxon Culture, edited by Charles Insley and Gale R. Owen-Crocker and published by Oxbow Books, presents five major cross-disciplinary discourses on the transformation of Anglo-Saxon culture seen through developments in literary text, imagery, historical documents, art and archaeological material culture. To find out more, just click on the links below.